the quabbalistic training is a science and art. The instructions for the mystical preliminary training must be clear if you want to be successful. Unfortunately the translations and comments of publishers are misleading as they contain errors and false assumptions. Further on, the original instructions have been published in the german language and this for a good reason. The german language has a pure pronunciation of sounds respectively letters which cannot easily be found in other languages. This is nice and good for the german students but it brings real difficulties for those students of other countries who do not speak german.

My wish was to clean up these problems and errors based on my own quabbalistic training and so I have created this workbook which allows every student worldwide to undergo the training with the correct instructions. Due to my own longterm practice, I can say that all is true what Bardon said and that it works. So if it works for me, it will work for you.

What we call “Quabbalah” seems to point at the Jewish tradition but in fact it is real theurgy. The real theurgist has transformed his nature in such a way that he embodies the macrocosmic divine nature (thanks to the mystical training). On this basis, he can create like God creates – with the cosmic, creative language. This is completely different to any form of magic.

I want to point here also at the fact that the universal teachings of theurgy should not be mixed up with traditional teachings. Tradition is just a cloth and theurgy is the eternal, universal core. The Jewish Kabbalah exists on different levels. We can say that there is a level of philosophic discussions. Then there is a level of meditation. And at last, there is what is called the “magical Kabbalah” which is in main forbidden as it is the key to God. When you think about what Bardon presents, then this is more about the magical Kabbalah, the forbidden way to achieve highest self-realization. It must be clear that philospical discussions and meditations cannot provide the same quality and effects like the highest practical science, art and training.

Besides this, we find the true cosmic language also in other cultures and other countries as it has an universal character. We find it even there where no one would ever imagine it.

However, important is to offer all mature souls the keys for their highest development.

The book has a special design which shall ease your meditations, your practical training. So it is only available on Lulu and in printed form. 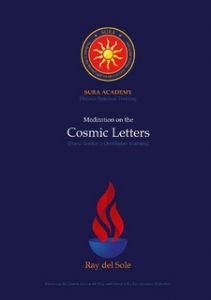 May it serve you well!

This site uses Akismet to reduce spam. Learn how your comment data is processed.